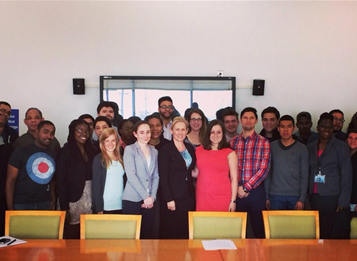 On Monday April 7, 2014, New York Public Interest Research Group, NYPIRG, along with The Roosevelt Institute Campus Network, hosted a student loan round table discussion with Senator Kirsten Gillibrand. Throughout the meeting held at the Borough of Manhattan Community College (BMCC), students discussed their ideas for student debt relief and how it relates to the work being done by Senator Gillibrand. With over 1 trillion dollars in outstanding student debt, Senator Gillibrand recognizes that something needs to be done to ease this burden.  She has introduced important legislation on the topic of student debt refinancing.   The Federal Student Loan Refinancing Act would allow refinancing of student loan debt similar to a mortgage or a business loan. Under the act, graduates with federal student loan debt would be able to refinance their high interest debt down to a rate of 4%. Students were encouraged to share thoughts and questions about the bill and strategies to get it passed. The first question was asked by Roosevelt Network member Emily Apple about how to make government work relating to student debt. The Roosevelt Network also brought up initiatives they have been working on relevant to the debt issue and stressing the need for refinancing. NYPIRG participants  engaged the senator about the initiatives they have been working on to help offset student loan debt as well as what they have been hearing about the issue from students and graduates on the ground. This roundtable provided an amazing opportunity for cooperation between students and government for much needed relief to the millennial generation who find themselves saddled by student debt.