This first appeared on demos.org
By Robert Hiltonsmith

On Sunday, the New York Times published an unbelievably misleading op-ed on the cost of college by Paul Campos, a law professor at University of Colorado, Boulder. In the piece, Professor Campos, who’s made a name for himself controversially disputing established conventional wisdom in the medical field on obesity research, attempts to give the same treatment to the well-established theory that decreasing state funding for higher education is driving tuition increases at public colleges and universities. Though there is some disagreement on how much of the blame state disinvestment should bear for rising tuition, Campos goes even further, arguing that vanishing state funding is a “fairy tale.”

Huh? This is so baldly wrong that I wonder how it possibly got by the Times’ fact-checkers. Campos claims that aggregate state higher funding is in fact skyrocketing, citing its rise from $11.1 billion in 1960 to $86.6 billion in 2009. Neglecting the reality that state funding has since declined to $78.8 billion, as of 2013, the huge flaw with his claim is that it ignores the equally rapid rise in enrollment at public universities, whose population has grown nearly 500 percent, from 2.5 million students in 1961 to nearly 15 million in 2013. Campos ignores this huge increase, despite the fact that nearly every reputable expert on higher education reports funding in per-student terms, and for good reason: because ignoring it would be irresponsible.

Arguing that funding need not have risen along with enrollment is like arguing that federal highway spending shouldn’t have increased in the past half century, even though the federal government now maintains 600,000 more miles of highway than it did in 1960, or arguing that food banks shouldn’t be spending more on food despite serving a vastly larger homeless population. Higher education is a particularly expensive service to provide because, as economists like to say, it benefits from few efficiencies of scale: that is, the “per-unit” cost of producing a lot of higher education is roughly the same as producing a small amount. Factories, for example, can often boost production without building new facilities by adding a shift or speeding up the production line.

Universities, however, must hire roughly the same number of professors and build the same number of dorm rooms for each additional hundred or thousand students they enroll. If they didn’t, university classrooms would end up looking something like this: An accurate account of state appropriations paints a much different picture. In Demos’ upcoming report, Pulling up the Higher Ed Ladder, on the causes of rising tuition, we analyzed revenue and expenditure data for public universities from the U.S. Department of Education’s Delta Cost Project database, which aggregates data from nearly every public university in the country.

The graph below, taken from that report, shows the shares of total core educational spending paid for by tuition revenue and state appropriations. As you can see, state appropriations paid for less than half of all core expenditures in 2011 at both public research universities (“flagship” schools) and smaller four-year state colleges, down from about two thirds third just a decade prior. Conversely, tuition now pays for more than half of core educational expenses at both groups of public four-year schools. 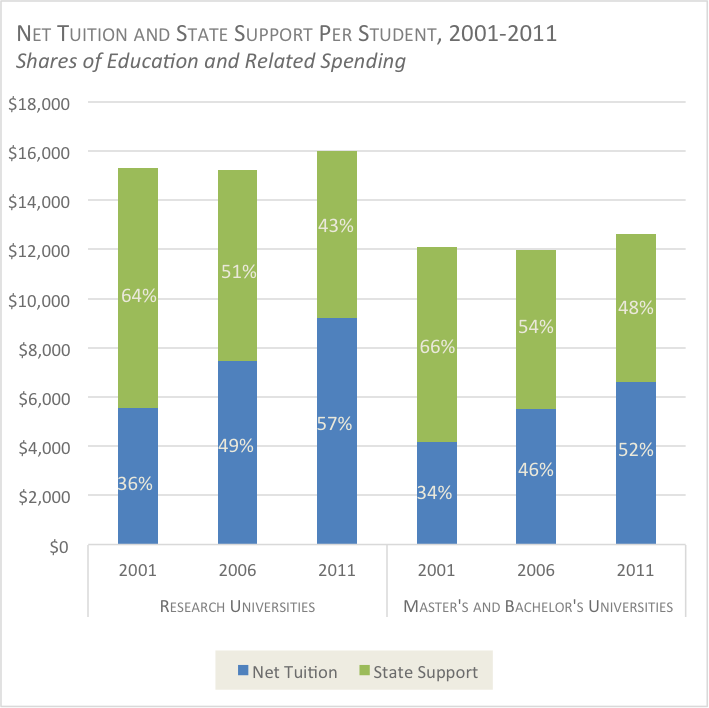 However, Campos’s accounting of state higher education funding isn’t even the most problematic part of his piece: that would be his characterization of the rise in administrative costs, his numbers on which sharply differ from any accurate accounting.

As the following graph shows, nationwide, spending on administrative functions (including student services) rose by an average of $374 per student at public research institutions and $215 per student at smaller state schools between 2001 and 2011, hardly the stratospheric rise Campos’s piece alleges. In contrast, net tuition revenue rose by more than $3,000 per student over that decade. And much of this relatively small rise in administrative spending, in turn, may be attributable to the exploding price of health benefits, which cost public universities an additional $3,000 per employee over the same decade.

We can and should have a healthy debate over the causes of rising tuition, and what reforms are necessary to halt that rise. But such a debate is only possible if it is grounded in a shared, evidence-based reality. And pieces like Professor Campos’s, which exist outside that reality, only muddy the waters.